skip to main | skip to sidebar

My candle burns at both ends;
it will not last the night;
but ah, my foes, and oh, my friends--
it gives a lovely light!
--Edna St. Vincent Millay
Hi, my name is Hoop, and I am an overachiever.

(except, apparently, when it comes to updating my blog)

I already pretty much knew that--and have had it confirmed by a professional--but as of today, I have concrete scientific evidence. What is it? My blood type, A+

California knows how to Party

Lipton is doing a great deal with a bunch of fitness, health and wellness bloggers and letting them each give away a free bike to people who comment on their sites. My bike is sitting alone and rarely used out on the west coast in my garage because shipping it out here would cost approximately the same as buying a new one...so I'm entering this contest for a free one. You should too!

(I found my way to Scale Junkie through Mizfit, who I found through Cranky Fitness. Yay blog-hopping! Enjoy the new reading)
Posted by Hoop at 4:27 PM 3 comments:

I guess it's only fitting that, with a lot of the rest of my life in flux, my rugby position is too! Over the past few weeks I've been starting to learn scrumhalf. It's been very interesting so far to feel the difference between it and my previous positions. Since I started on the wing (with the directive "pass backwards, hit anyone with the ball, and run like hell when Ruth kicks"), I've been steadily moving inwards--I'll be in the front row yet!

There is definitely a huge amount to learn--like how to direct forwards, look for the 10, make sure the ruck is stable, figure out where the defense is lined up, make sure no one is in the channel, and oh right, dig the ball out! It's a little overwhelming, but now that I've played about 1.5 full games there, I think I'm understanding it better. I think I need to be more deliberate and a little less worried about getting the ball out right away. It's all multi-tasking!

One thing that really surprised me is how low to the ground I should be--I guess I play really upright when I'm in the backs. Webby, my scrumhalf sensei, has me doing this knuckle-dragging orangutan thing before I pass off the ground to get me used to getting lower, and Slitty has been giving me lots of little ways to improve my pass. This young grasshopper will learn...and will start watching more rugby DVDs!
Posted by Hoop at 4:57 PM No comments:

It really does exist--the 3rd thursday in April each year. Now I need to find out if there's a national fist-pound day, or a national "that's what she said" day...[Edit: the latter exists!]

I wanted to post this yesterday but a construction worker cut a cable in our building and crashed the server--we had no internet, no phone, and no access to any of our files. We still had to stay at work (who knows why) so we played a lot of minesweeper and then played baseball in the parking lot :)

My birthday was on Tuesday. Like all my birthdays in the past 5 years, it included lots of rugby! But whereas for those I was on a plane/at sweet 16/in a hotel room in Rhode Island frantically trying to finish my thesis, for this one I was at work, at rugby practice, and then out. It was such a great day and I had a ton of fun. I was particularly touched by the many texts & emails I got from the U19 rugby players! It was also great to have my work/school friends and my rugby friends in the same place that night--even if they did happen to pick tables at opposite ends of the bar! That night of hanging out, plus Saturday night's dancing ridiculousness, made for one of my favourite birthdays.

Particularly fun was the juxtaposition between my teammates, who congratulated me on "finally becoming a teenager" and "having my sweet sixteen", and my sister, who texted me "happy birthday you grandma! you're old and that scares me." I like this age, I think I'll stay here :)
Posted by Hoop at 3:31 PM 1 comment:

Today is a blue-sky, 70-degree, break-out-the-flipflops kind of day. Spring has finally arrived! I'm so excited to see crocuses, daffodils and tulips poking out of the ground.

Since blogging last, lots has happened. I haven't been avoiding writing it down, but it's been crazy. Now for some recapping...part 1.

I spent 3 days at a conference for work in Monterey, CA--our hotel was right next to In N Out (double double animal style, mmm) and I was in heaven! I schmoozed my butt off and was glad when it ended. As much fun as it is to get free pens (and free drinks), I hate having those fake conversations. It was gloriously exciting to hop on a plane and head home to Beautiful British Columbia.

Being at home was a whirlwind as usual, but so much fun. When I walked in the door, my dad wanted to show me some show he'd DVR'd about the Iditarod. Except it wasn't the Iditarod--it was the IDIOTAROD. And as the camera follows the insanity, who do they stop to interview? The Angry Whores!! I'm not in the segment (I think I was doing double dutch jump rope at that point) but Rachel explained our name to the masses. I'm definitely going to have to figure out how to get that on dvd and youtube!

The highlight of home was spending 3 days at Whistler. Having grown up on a ski season that ran from November to May (yes, May--in a t-shirt!), I've really missed skiing these past few years--nagging injuries and short visits home have kept me off the slopes. No more! I had two wonderful days of skiing in all conditions imaginable, from fog and light hail to dazzling sunshine. 25cm of fresh powder didn't hurt either! Neither did the chance to participate in the Fresh Tracks program--a breakfast buffet and chance to be on the mountain by 8am. My friend Mark and I burned through at least 7 runs before the rest of our group had even left the condo, and got some amazing shots of the view from the Peak. 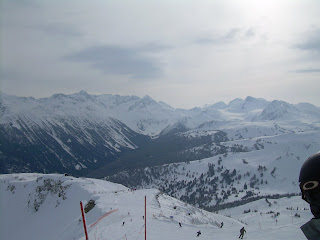 Relaxing in the hot tub and going out in the Village were also fun. It was great to see all the changes that have been made in preparation for the Olympics, from highway improvements (finally!) to bleacher construction on the downhill ski course. I have to say, it's pretty cool to know that I've skied the same course that world-class athletes will compete on--just a tiny bit faster ;)

When I leave home after my all-too-short visits, I always wish I could stay longer. Be careful what you wish for! So began my odyssey...

When I went through American customs, the official sent me to secondary processing. I've never been sent there before, but in I went, trusting that all would be well. Silly me!

The woman in charge of the waiting room had the biggest Napoleon complex I've ever witnessed. Any attempt at a question was foiled. "Please ma'am, my flight is boarding" fell on deaf ears. She shushed Armani-suited businessmen as if they were schoolchildren. After informing me that I was not in "the system" (5 years, and it forgets me like that? Only 3 months after our last encounter?), she took me for extra processing. I am clearly a highly sketchy individual.

"Extra processing", which is a fancy term for standing in a different room with more stern-faced power-people, revealed that I was in the system after all. This did me no good considering my plane had taken off 10 minutes before, but was a comfort nonetheless. Thanks America, I knew you still loved me!

However, as Napoleon Woman handed back my paperwork, she gave me The Eye. Though the system had failed her and allowed my passage, she would have her revenge. As I turned to walk back out into the main terminal, she grabbed my shoulder and smiled like the sea witch Ursula in the Little Mermaid. "Oh no," she nearly purred."You can't go back that way. You have to go all the way around, through the terminal, and back through Canadian customs."

Airport security is a pain in the ass when there isn't even the consolation of a flight at the end. So is having to check your bags when you know damn well they aren't going anywhere! When I finally made it past the X rays, around the gates, and through the masses in the line, I was faced with a Canadian customs official who wanted to know where I had been. He could barely conceal his laughter when I told him I hadn't actually gone anywhere. "Man, you've had a worse day than I have!"

It could have been worse--at least I had somewhere to stay in Vancouver! But I never want to spend 5 hours in an airport again unless I'm actually going somewhere. They're fun, but not that fun!

Side note: when I arrived at customs the next day for my rescheduled flight, I went through with no problems. It was smooth sailing until the Xray security agent told me I had been selected for "random searching". Of course. One full-body pat-down later, I was free and clear and on a non-stop flight to JFK.

I've been a bad blogger...I've been neglecting writing about things that I really wanted to talk about, like the awesome concert I went to last week. But I've been pretty occupied thinking about work and The Future...
Last week I had to tell HR that I didn't want to renew my visa with this company. HR said that was fine and I would just work til it expires in July, and they were surprisingly chill about it. However, they said I had to tell my boss ASAP and not wait till closer to that time. Because he was always in meetings or whatnot, I had to wait a day and a half and I was nervous the whole time. I mean, I effectively gave 4 month notice, which is a weird situation to be in. Will I be treated differently? Will I still be traveling to conferences? When will I have to start passing off my properties to coworkers? Does everyone know?

Now they're asking if I want to work in the India office for 4 months, and I have to admit, a tiny part of me is tempted--how many 22 year olds with a year of experience at the company get international postings? It would be an incredible experience to live abroad and it's something I plan on doing anyways...

On the flip side, I really want to stay in NY for the time being. It's an incredible city full of amazing people and there is so much left to explore. Plus I would miss the summer and half the fall rugby seasons! But really, the biggest reason is my desire to move on from my job in general--why spend 4 months in another country continuing something I don't find fulfilling?

It's really strange that I'm even feeling a little bit conflicted about this because I was totally set against it before. I still am, but I guess the wanderer in me is ready for some more exploring...
Posted by Hoop at 4:31 PM No comments:

Hoop
I like working out, and food, not necessarily in that order. I enjoy the 80s way too much, and am a grammar nerd. I am bi-coastal and love being a tourist.